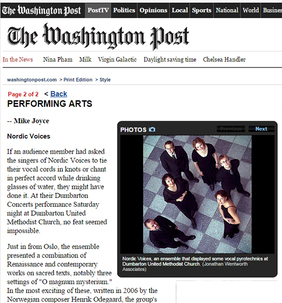 Ronni Reich in "Washington Post" february 6, 2008 :
Just in from Oslo, the ensemble presented a combination of Renaissance and contemporary works on sacred texts, notably three settings of "O magnum mysterium." In the most exciting of these, written in 2006 by the Norwegian composer Henrik Odegaard, the groups three women and three men stretched voice and mind to their limits. They explored quarter tones and overtones, let out fierce, tribal-sounding calls, hummed, and saturated the room in glorious, full-voiced sound. At times, they sounded like an engine revving up; at others, like an angelic choir. They transitioned seamlessly from one style to another, and intonation was flawless. Their entrances and cutoffs were perfectly timed, as though a current of air were being switched on and off.